One of the world’s most recognizable harmonicas, known for its full tone and wood comb
Tuned to key of C; also available in other major keys, lower and higher octave, and minor tunings
Made famous by players from Little Walter to John Lennon, Paul Butterfield to Bruce Springsteen, and more

Product prices and availability are accurate as of the date/time indicated and are subject to change. Any price and availability information displayed on [relevant Amazon Site(s), as applicable] at the time of purchase will apply to the purchase of this product.

The one, The Only, The Original — The harp that was there when harmonica blues was born. Made famous When played by every serious harmonica player from little Walter to John Lennon, Paul Butterfield to Bruce Springsteen, Neil young and many, many more. The result of over 100 years of tradition and German craftsmanship, It is still the number one choice of top professionals and the most recognizable model All over the world, known for its full tone and wood comb. Play the Marine Band and be a part of history. Available in 12 major keys, lower and higher octave and minor tunings. Reeds: 40 Reed plates: brass; 0. 9 mm comb: wood length in cm: Approx. 15. 9 this is the essence of the classic line — traditional values and cutting edge technology. Extremely precise tools minimize air loss and ensure a quicker response and bigger volume. As always, each classic harmonica is exclusively handmade. Horner’s diatonic harmonicas set the industry standard through their high quality construction, Excellent response and unsurpassed tone. Often called “blues Harps”, they have been a fixture as melody and accompaniment instruments in blues, rock, country, and folk bands, as well as many Other styles of music and musical ensembles. Richter tuning and Undivided air channels allow for bending and overblowing The reeds, creating the signature Wailing sound typical of the harmonica.

From the birth of the blues, the Marine Band 1896 has been a constant musical fixture. Played by iconic figures such as Little Walter, Paul Butterfield, and Bob Dylan, it remains the top choice for the top professional, as well as aspiring musicians around the globe. 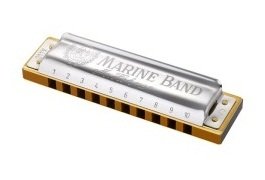 The One, The Only, The Original.

Relying upon over a century of German craftsmanship and tradition, this harmonica has been universally recognized for its full tone, musical range, and distinctive wood comb. Let your musical expression be a part of the continuing Marine Band legacy.

If there is a single style of music where the harmonica can be said to have had a formative influence then it has to be the blues. The instrument in question is the Marine Band 1896 Classic, the original blues harmonica and historically the world’s most popular harmonica. Its uniquely authentic sound has defined the role of the harmonica in the blues tradition and made it the benchmark harp by which all others are judged. The pearwood comb, arched covers with side vents and traditional HOHNER tuning combine to create the legendary sound which can be heard on countless classic blues recordings from the 1920s to the present day.

A Whole Lot Of History.

In the heyday of the harmonica during the 1920s, millions of Marine Bands were exported to the USA every year. European migrants played a considerable role in the dissemination of the instrument and areas with a large population of German settlers such as Texas or Carolina also produced large numbers of black harp players. The Marine Band was cheap and readily available in any general store, so it became the most widely distributed musical instrument in the USA at this time

Music is one of the most fundamental forms of human expression. For over 150 years it has been HOHNER’s declared mission to bring the joy of music making to people all over the world, to provide them with the best possible instruments so that they can discover their own musical creativity and experience the emotional and communicative power of music for themselves.

Today our assortment ranges from harmonicas and accordions to melodicas, recorders, guitars and ukuleles as well as children’s instruments. At the company headquarters in Trossingen with 180 employees, state-of-the-art precision tools, constantly optimized production methods and finest craftsmanship come together to create top quality musical instruments which are sold in over 85 countries.

One of the world’s most recognizable harmonicas, known for its full tone and wood comb
Tuned to key of C; also available in other major keys, lower and higher octave, and minor tunings
Made famous by players from Little Walter to John Lennon, Paul Butterfield to Bruce Springsteen, and more
20 reeds with 0.9mm brass reedplates; pearwood comb
Includes distinctive protective case

Only logged in customers who have purchased this product may leave a review.

There are no reviews yet.